The 2010 MLB Draft has the chance to go down as one of the best in recent memory. So far, 12 players from the first and comp rounds have made their major league debuts, four of which were named All-Stars. In addition, it’s likely that many of the high schoolers from this year’s first and comp class, including Pirates pitcher Jameson Taillon, Phillies pitcher Jesse Biddle, Blue Jays pitcher Aaron Sanchez, and Mets pitcher Noah Syndergaard, as well as Angels outfielder Kaleb Cowart, Marlins third baseman Zack Cox, and Angels second baseman Taylor Lindsey may all make their major league debuts this year.

But the one name that sticks out from that class didn’t even sign with his team. And no, he didn’t end up being redrafted, but he did go on a fast track through the minors ending up at AAA last year for the Iowa Cubs. That player is former Texas A&M pitcher Barret Loux.

Two years before Michael Wacha put Texas A&M baseball on the map, Barret Loux was the big name for the Aggies. A big pitcher at 6’5″ and 230 pounds, armed with a fastball, slider, curve, and changeup, Loux put up excellent numbers for the Aggies, including leading the team in strikeouts twice, as well as being a nominee for the Golden Spikes award. He wasn’t as well regarded as his former teammate however, and was envisioned as a late first round pick. However, the Arizona Diamondbacks decided that he was worth the 6th overall draft choice (keep in mind, this was before the hard slot money system was put into place) and picked him ahead of such names as Matt Harvey and Chris Sale.

Arizona did have a deal in place for him, but a failed physical due to a labrum tear derailed it. As a consequence, the Diamondbacks never signed him, and he became a free agent. In November of that year, Loux and the Texas Rangers came to an agreement on a contract. It was Loux’s situation which led to some of the revamping of the draft rules, including mandatory physicals for prospects before the draft, and free agency for those who failed them.

Loux spent two seasons in the Rangers minor league system, playing for A level Myrtle Beach in 2011 and AA Frisco in 2012. In both those seasons, he struck out at least 100 batters, had ERAs under 3.81, and at Frisco, won all but one of his decisions.

However, Loux’s time with Texas came to an end as the Texas Rangers, having made a deal with the Chicago Cubs for Geovany Soto, were forced to give him up when the player originally send in the deal, pitcher Jake Brigham, was found to have an injury history not dissimilar to Loux’s. Loux was traded for Brigham, and started the season at AAA Iowa. While his stats were not as impressive as they were in Texas, he failed to post 100 strikeouts for the first time since his sophomore season at A&M, and he had a sub .500 win-loss record, as well as an ERA over 4, Loux still has managed to somewhat resurrect his prospect status.

While he was not ranked in the top 20 of the Cubs end of 2013 list, the fact that he has managed to jump three levels, without appearing in any of the A sub levels should indicate that he will have a fair shot at making the big league roster.

It may come out that Arizona should have kept him barring the injury concerns, especially if Loux manages to impress this spring and plays as a dark horse rotation candidate. In addition, it could help show that the Cubs didn’t exactly fail in that aspect of the draft. 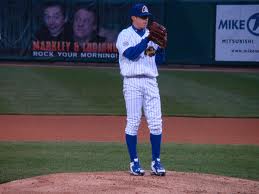 In that same draft, the Cubs took a right handed pitcher out of Division II Southern Arkansas University, Hayden Simpson with the 16th overall pick. Simpson who was viewed by many to be a questionable pick from the beginning, struggled in his three years in the Cubs’ system.

Perhaps it was the fact that he never was the same after coming down with a case of Mono, or perhaps it was the hype that was so unjustly heaped upon him, but Simpson, who was known for being an aggressive pitcher, never amounted to what he was pegged to be. He never advanced past High-A Daytona, and as of the end of 2013, was pitching for the Southern Illinois Miners of the Frontier League.

If Barret Loux can prove that he is Major League ready, then in all likelihood, the Cubs will look favorably on the college arms of the 2014 draft class; a commodity that the Cubs are in serious need of. Loux, along with the other major league ready Cubs prospects could help bring Chicago back to dominance.

This is the second part of my two part series on the Futures game, which is the minor league equivalent of the All-Star game. Having already covered Team USA, I now go to the World Team.

I forgot to mention that both Team USA and the World Team are managed by Mets alums. Team USA is managed by Mookie Wilson, while Edgardo Alfonzo will take the reigns as manager of the World team.

Now, let’s go onto the roster. Again, here’s the list, from CBS.

A little disappointing to note that 2012 Futures gamer Jameson Taillon, who hails from Canada, will not be pitching for the team. Still, the pitching is… interesting to say the least. The three most notable names that stick out to me are Yordano Ventura of the Royals, who likely could be called up sometime in the future, Rafael De Paula, who is the Yankees’ best international pitcher, and Rafael Montero, who has come out of nowhere and made himself a topic of conversation, as he seems to be a favorite to make next year’s Mets rotation. Montero will likely start the game this year for the World Team. It’s interesting to also note that the World team has more pitchers in AAA (4) than Team USA (1). 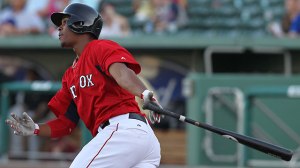 Onto the catchers and infielders. The World Team’s infield looks almost as good as it did last year, when Jurickson Profar was playing on the World team. While Profar is no longer eligible, 2012 Futures gamer Francisco Lindor is. Also playing is Red Sox super prospect Xander Bogaerts, whom people got a good look at in the 2013 World Baseball Classic, and Miguel Sano, who, along with Byron Buxton, looks to provide the Minnesota Twins with a very promising future.

On a name basis, the outfield at least looked promising, but injuries to the two best players, Jorge Soler of the Cubs, and Oscar Taveras of the Cardinals, likely indicate that there will be some shuffling done before All-star Sunday.

The Final vote has five interesting candidates up for selection, although given the outfield situation, it might be cut down to three.

Baez, who hit four home runs in a game this year, is part of the Cubs future outfield which will likely consist of him, Jorge Soler, and Albert Almora. He’s a 2011 first round draft pick.

Choi garnered some attention last year when he won the Arizona League MVP. He’s a contact hitter with barely any power, but is defensively strong.

Correa was the first overall pick of the 2012 draft by the Astros. A slick fielder with some hitting ability, he’s made it as high as the Midwest League.

Nunez has jumped on the map this year by destroying Midwest league pitching; he’s hit 13 home runs already. He and Addison Russell may share the A’s left side of the infield by 2018.

Odor is a defensive asset who flashes some hitting ability. Given the state of the Rangers infield for the forseeable future, Odor may find himself as trade bait sometime in the future.

And now, another poll. Who do you want to see in the futures game?

Sadly, I could not find any updates on the World team voting.

First of all, I am completely and utterly angry with what BlogTalkRadio put me through. This was supposed to be one of the best interviews for my show, and what happens? The regular lines are down, the auxiliary lines don’t work, my feed drops not once, not twice, but three times in one show. All in all, if not for the fact that we all kept level heads, this probably would have been a complete disaster. I mean the only thing that rivaled this in terms of complete and utter breakdown is this:

Nonetheless, I would like to thank Jamie O’Rourke, Sal Baglieri, and Mike Passanisi, the people who made this double interview possible. Mike is featured in this, as he is telling me that I had to cut my Taillon interview to ten minutes. I also would like to thank Dickerson and Taillon for their patience while this whole mess was sorted out.

Here is the link, as the embedder is not working.

It was around this time last year that young phenom Bryce Harper had truly made his mark in baseball; a year in which he made his first trip to the Major League All-Star game, and later, would solidify his case as the future of baseball by winning the Rookie of the Year award. In that same year, another young phenom arose in Anaheim, doing virtually the same thing as Harper, only better.

This year, Harper is an early favorite to win the MVP award. If he wins the award, he will join such names as Ryan Howard and Dustin Pedroia.

Similarly, Matt Harvey made his Major League debut back in late July, starting off his career with an eleven strikeout performance and two major league hits. This year, so far, he has taken two perfect games into the seventh inning, only to lose them on close calls. Harvey has already won the Pitcher of the Month award for April, and there is no telling how high is ceiling is now.

On Friday, Prospects2Pros affiliate The Final Out will be broadcasting a live interview of Pittsburgh Pirates prospects Jameson Taillon and Alex Dickerson. The interview is scheduled for 1:30 in the afternoon and will last thirty minutes. If anybody has a question for either prospect, please write it in the comments section. It may be asked during the interview.