The first 14 picks have been revealed for MinorLeagueMadhouse’s 2015 MLB Mock Draft; what happens with the next seven? 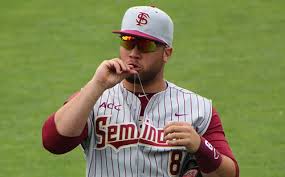 The Braves dismantled their outfield, with the exception of BJ Upton, this winter, sending Justin Upton to the Padres and Jason Heyward to the Cardinals. When a team decides to take apart an area that could be considered well-established, it’s clear that something has gone wrong. Even the current Braves outfield leaves a lot to be desired, which brings me to whom they should draft.

DJ Stewart is Florida State’s top outfielder, a tank of a man, who, although he saw his stock drop somewhat due to a poor summer, scouts feel that it’s nothing to worry about.

Though he looks the part of a slugger, Stewart needs some fine tuning to actually be a true power hitter, as his stance and swing prevents him from making powerful contact.Although it looks like a reach now, Stewart’s potential, plus the opportunity in his junior year, will definitely springboard him into the top 15, especially in a weak collegiate hitter’s market.

Not only that, but Chipper Jones would potentially endorse the move, especially given the fact that Stewart went to Jones’ prep alma mater. 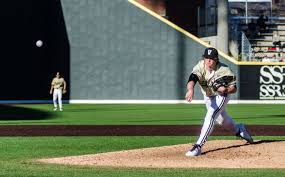 The Brewers are probably the last place you’d look these days for a homegrown pitcher, but the emergence of Tyler Thornburg and Jimmy Nelson as potential All-Star starters has allowed the team to stop being averse to drafting high pitching. Heck, they took a chance on Devin Williams and Kodi Medeiros the past two years, maybe it’s time to go for a bigger fish after having slow success with the once thought to be deadly combination of Taylor Jungmann and Jed Bradley. In this year’s strong collegiate pitching class, the Brewers have plenty of options, even if they’re mainly right-handed starters.

Take Vanderbilt starter Carson Fulmer for instance. The latest in a long line of intriguing Vanderbilt prospects, Fulmer can throw mid 90’s heat with regularity, and has solid secondary and tertiary offerings to give him dimension. What Fulmer needs work on is his control, and his delivery needs to be less… severe.

Although scouts will constantly knock pitchers who lack height, Fulmer’s experience with the Commodores and Team USA, both premier levels of competition, have shown that it is just a number, and given Marcus Stroman’s successful debut this season, Fulmer can only help that opinion change further. 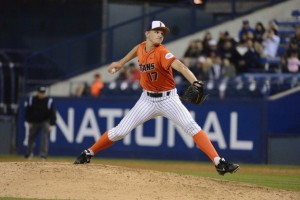 When it comes to the Yankees, especially in the draft, they usually go for players that either have major name recognition or are just plain good. Need proof? In 2008, the team drafted Gerrit Cole, who three years later would become the top pick in the 2011 draft, and another two years later, the ace of the Pittsburgh Pirates staff. In 2011, they drafted Dante Bichette Jr, the former little league star and son of Rockies legend Dante Bichette. In 2012, they drafted Rob Refsnyder, that year’s College World Series Most Outstanding Player, and in 2013, they took Ian Clarkin, who has emerged as one of the best young starters of the 2013 class.

2015 might as well be known as the year of the famous retreads, as both Brady Aiken and Phil Bickford, a former CSU Fullerton Titan, now a member of the College of Southern Nevada, highlight this year’s class. Bickford’s got the fame, as the only member of the 2013 first round draft class not to sign, he’s since dominated the summer league circuit after a meh freshman year at Fullerton. After being voted the Cape’s best prospect, Bickford left Fullerton, deciding that 2016 was too long of a wait for him.

Bickford’s fastball is the main reason why he’s such an appealing project, a mid 90’s offering with plenty of life, he can play the strike zone to his advantage. His slider has also become a solid pitch, and while he does need development on his third, a change, he could become a solid 3 pitch starter. Bickford is definitely more than a name though, and he’ll be worth watching when he plays his final season in college, or to be more precise, junior college. 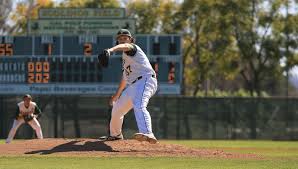 I find it incredibly hard to believe that the Cleveland Indians are that bad at developing starting pitchers, especially out of college. What are they, anti-moneyball? While they have had success with developing pitchers that they have gotten elsewhere, see Corey Kluber as the major example, the fact that the Indians have failed to make a homegrown pitcher blossom since CC Sabathia is baffling. Maybe there is hope that Kyle Crockett will buck the trend, but that’s another story.

There’s a caveat to developing small school pitchers, that the athlete will be on a major learning curve, that  they haven’t exactly faced prime competition, but really, if it’s that hard, then why draft small school pitchers in the first place? Of course, pitchers like Division II star and Cal Poly Pomona ace Cody Ponce would really be at a major disadvantage.

Ponce worked his way through two seasons of California Collegiate Athletic Association baseball to make it to the Cape League this past summer, and while there, scouts got a taste of why Ponce is special.

Ponce will be a work in progress, but if the Indians pitching coaches can somehow turn a Stetson product into a Cy Young winner, it wouldn’t hurt to see what they could do with a Division II star. 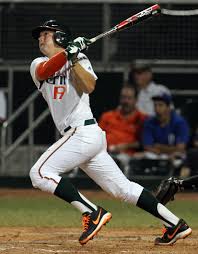 I am of the belief that a team often needs to stretch out of their comfort zone when it comes to drafting and developing prospects. And while I did catch a little flak for saying the Giants should go for a prep outfielder when there were plenty of pitchers, which is their forté, my belief is that the Giants will need to build in other areas in order to stay competitive.

A third baseman can be replaced by the next man up, in this case, Matt Duffy, but when you lose two big power guys in one offseason, in a weak free agent class, then maybe it’s time to start looking at future homegrowns.

I’ve been pretty high on Miami 1B/3B David Thompson for a while. He’s a prodigy, the first Hurricane hitter to ever make his debut as a cleanup man, and a constant All-America threat. While his sophomore campaign was cut short due to life saving surgery for Thoracic Outlet Syndrome, he showed that he hadn’t lost a step when he played in the Cape that summer. Thompson is a student of the game, he was able to reinvent his swing after his injury, and he really adjusted to the learning curve in summer ball.

Health will be an issue, but if Thompson is able to get back to his freshman potential, then he’ll definitely be a late first round pick. 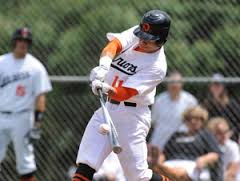 Every so often, there’s a team that has such a dearth of talent in their system that you wish they would just not have a first round pick. In this case, it’s the Pirates. The Pirates are strong in this year’s draft’s areas of strength, outfield, and right-handed pitcher, which means that BPA is the best way to go.

The BPA for the Pirates would be Brother Rice High School outfielder Nick Plummer, A lefty, Plummer is valuable because he has advanced power for his age. Plummer also has a good baseball IQ, taking “reach” pitches and aiming for the gaps.

Plummer is no Andrew McCutchen, nor is he Austin Meadows, but he could find value in a lineup as a 6 hitter. It’ll be interesting to see if he can improve his stock in the coming season. 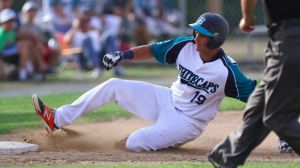 I could use the refrain from Kenny Rogers’ The Gambler as my intro for the Oakland A’s, as they pretty much gambled their bright future, that is, Addison Russell, Billy McKinney, etc. for a shot at the World Series which ultimately failed, leading to a Marlins type fire sale for prospects whom I wouldn’t even recognize.

It was clear that when the A’s ditched Moneyball, they really got some major talent, but sometimes, familiarity with an old system may be the best option. In fact, familiarity as a whole is often the best way of going at things during a rebuild.

Meet University of the Pacific outfielder Gio Brusa. In perhaps the weakest hitting class of any draft, Brusa stands out by being a switch hitting slugger. Although he’s only recently reclaimed his hitting ability in summer ball that led to a failed 5 round courtship by Boston in 2012, Brusa’s potential could lead to him hitting 3rd in a major league lineup.

Brusa is a more well-rounded athlete as he has solid running and fielding ability to complement his hitting. He also has the added appeal of being an in state and somewhat local product; University of the Pacific is based in Stockton, home of the Ports, the A’s California League club.